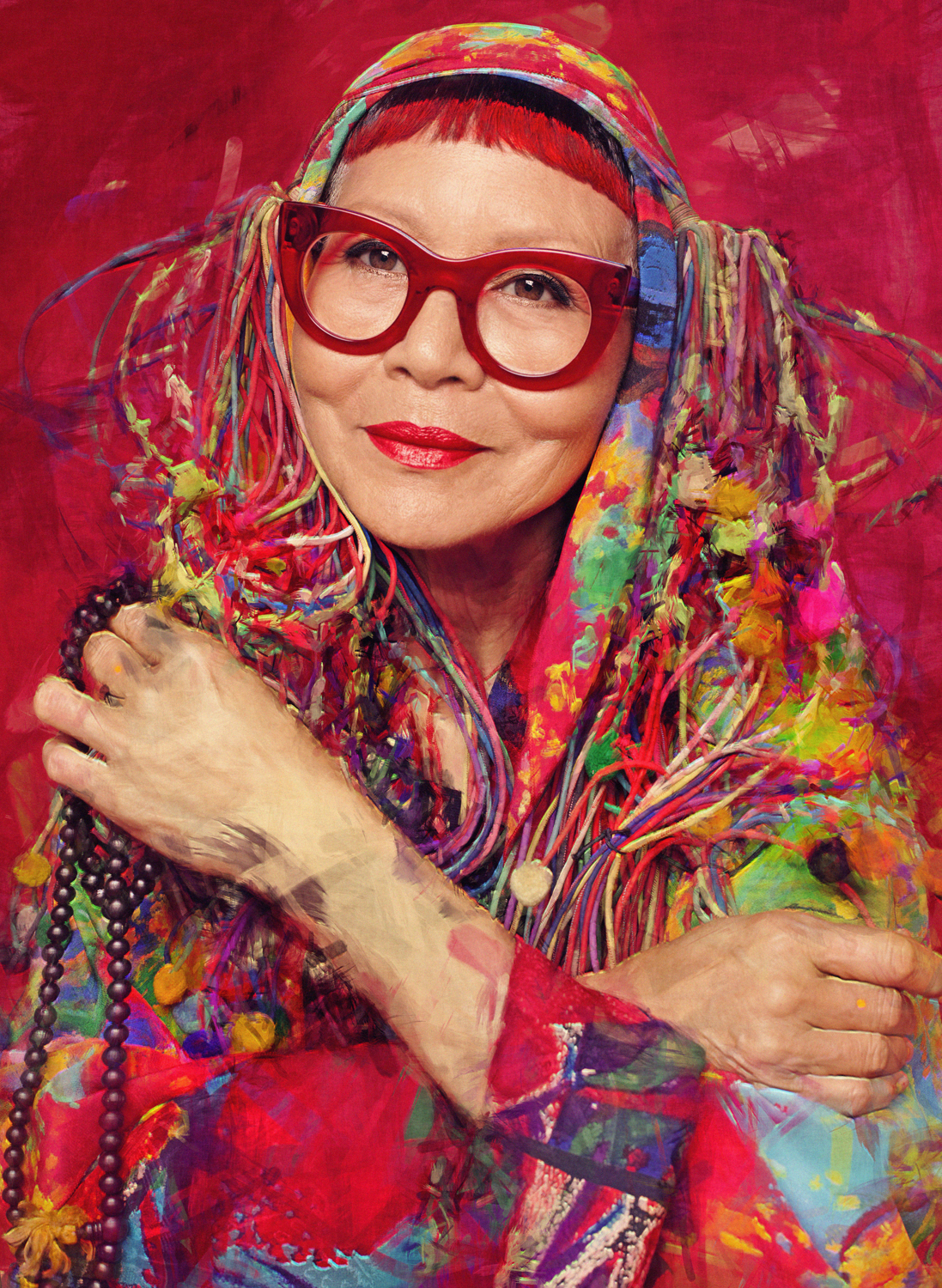 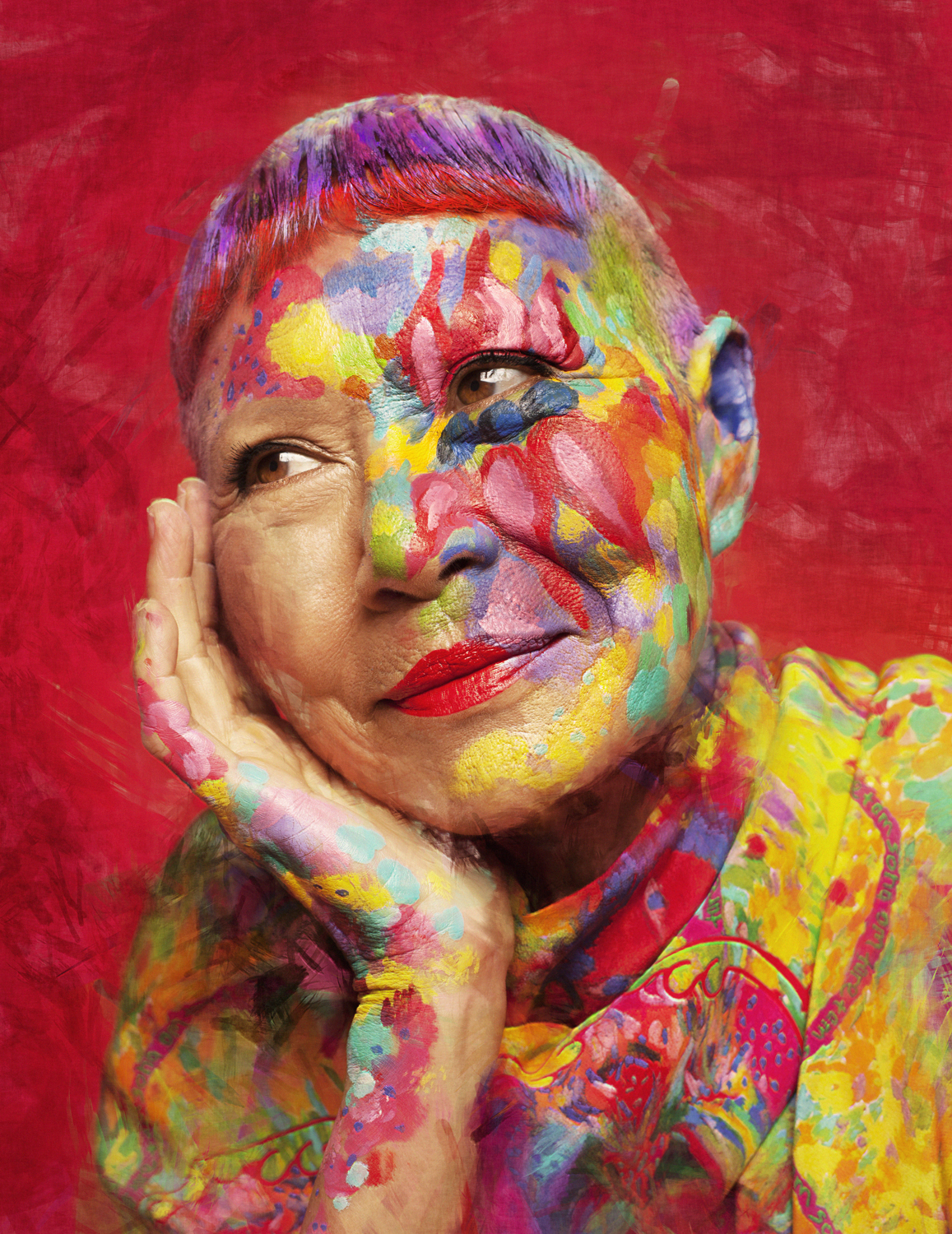 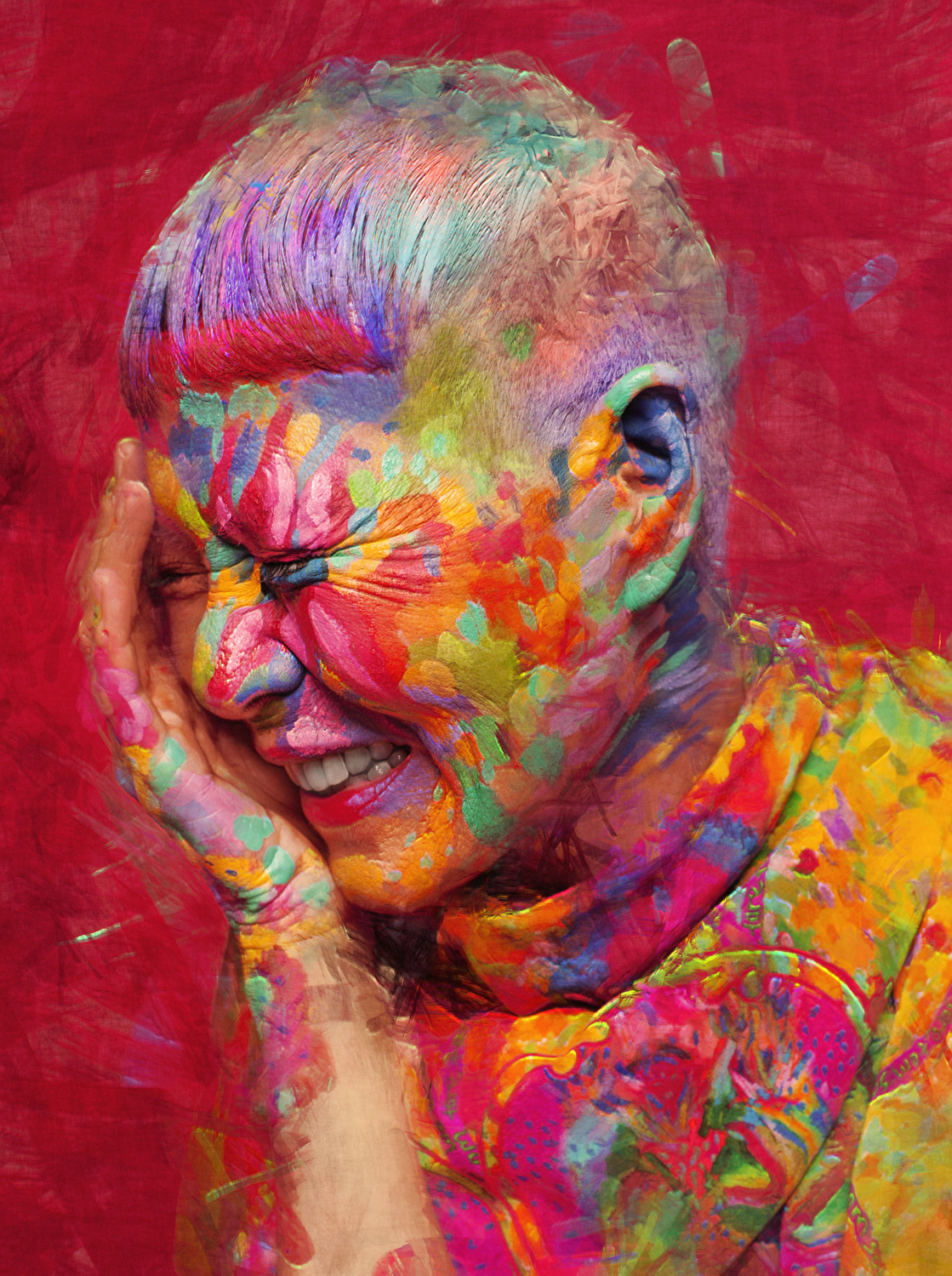 A true original, Chinese-Australian designer Jenny Kee has lived, as the title of her autobiography suggests, a big life. Her visionary work with Linda Jackson transformed the Australian landscape into a colourful fashion vision of beauty and joy. Their legacy can still be felt within the popular Australian designers of today including, Romance Was Born, Discount Universe and Emma Mulholland. With these cult brands developing a large following, the body of work from Jenny and Linda has experienced a new renaissance.

Jenny Kee was born and raised in Sydney, growing up in beautiful North Bondi in the 1950s. She always had a wonderful relationship with the land, even though in her youth she didn’t appreciate its full significance. “Bondi Beach… The sounds of shark alarms… We took all the beauty for granted because that was all we knew.” During this period Australia was still a very conservative nation. Jenny always remembers looking over her shoulder. “There were a lot of racist incidents. My brother was heavily bullied. So from a very early age I knew I had to develop my personality in order to attain popularity. I had to find a way to transcend this Asian face.”

Jenny’s love of fashion began with her mother. “Mum was very stylish. Some of my earliest memories are ordering her to wear my favourite pieces of fashion. A beautiful emerald green coat or a pale blue polka dot dress. I was my mother’s Chinadoll. She loved to dress me up. I loved to be dressed up. If I wanted something, she would travel all across Sydney to the haberdashery shops to find just the right fabric.”

In her late teens, Jenny informed her mum she wouldn’t be finishing school. She enrolled in design school but soon found herself disheartened with the lack of imagination. “It was basically dress making. Derivative of European fashion. These days the fashion schools allow the kids to fully experiment and explore, but you have to realise we were in a very creatively starved environment. In the Menzies government era, people aspired for a house, a car and a swimming pool. We were just discovering the Beatles, the Stones and Mod culture.”

At 17, this fascination lead Jenny to an extraordinary adventure, along with her close girlfriends, they infiltrated the heavily guarded fortress of the Beatles hotel where they were staying whilst touring Australia. Once inside, the ring leader of the gang, Judy, discovered a way to jam the hotel elevator by pushing buttons on each level, forcing the Beatles on arrival to use the staircase. The girls intercepted them in the staircase, leading to an invite back to their room and a personal invite to Jenny from John Lennon to spend the night with him.

That one night of passion fueled the possibility of more adventure in Jenny’s life and she soon found herself headed to London. “Six weeks on the ship ‘The Austral East Ocean Liner’. I travelled with my best friend Colleen.” She landed in swinging London in 1965, with no plans to design and feeling completely open to new experiences. She worked in both Abbington Road and the Chelsea Antique Market during the rise of the Art Nouveau aesthetic with cult stores like Biba. It was the beginning of retro clothing and Jenny was amongst a number of Australian girls who got a job there. Their instructions were to be cool to the customers.

“Going into work was going into play. All the rock stars and their girlfriends would pop in figuring out what they wanted to purchase. I still remember Bob Dylan and Brian Jones coming in on acid with velvet cloaks on. Outside, they were famous people, but here they were just as intrigued as everyone else. It was a feeling of community. Like-minded artists coming to a happening place.”

Incredible talents such as Grace Coddington, Manolo Blahnik and Anna Piaggi were all a part of the fashion tribe that eventually led Jenny to meeting her first husband, Australian artist Michael Ramsden.

“We fell madly in love. Michael was such an amazingly interesting person. We were in the throes of style, fashion and art. We have a vision together and he started painting well.”

After the death of Jimmy Hendrix, London started to evolve into a darker place. “The culture of drugs meant a lot of people started dying.” Although it hadn’t been their plan to leave London, Michael had been invited to exhibit his work in Melbourne. As soon as the pair returned to Australia, they felt a calling to stay. “The transformation of Australia was incredible. Gough Whitlam was in power. It was an amazing creative time where a lot of expats came home from the world capitals. We had a nationalistic pride of our country.” Jenny didn’t expect Australia to be as amazing as her London experience. Fate had another plan when she met Linda Jackson, an artist and designer that Jenny describes as her ‘twin soul’. “We exploded when we met!”

They were both obsessed with the 1950s and in her quest to setup home in Australia, Jenny found a shop in Sydney’s strand arcade. “It was on the first floor, with all the milliners and cobblers. It was a jewel of an antique and it felt like the right place.” Jenny used Michael’s painting Flamingo Parks as the symbol of the store. Using it as a visual centerpiece she brought in cushions, patchwork quilts and Linda Jackson’s designs amongst other labels. “The concept of Flamingo Parks was unheard of at the time because of the variety of labels and objects for sale. In Australia, a dress shop was a dress shop, so it was very unusual to sell multiple items. I knew I had to create something totally unique from what was happening in London.”

Eventually Jenny phased out the other labels and the two soon collaborated on what was to become an iconic phase of Australian fashion – beautiful knitted wool creations featuring Australian fauna and flora emblems. “They instantly started selling really well. Hand knitted, zip ups selling for $55 straight off the rack.” With famous clients like David Bowie and Princess Diana, the business took off with Jenny’s mum playing an active role in the store. “Mum would do all the hand written receipts – we were a family business.”

The label soared in popularity in the late ‘70sand early ‘80s. In 1983, when Karl Lagerfeld had just been appointed at Chanel, he used Jenny’s Black Opal print from 1981 to line all the suits in the 65 piece collection. In a time where there was no internet or media, it was the legendary street style photographer Bill Cunningham who penned a page for the New York Times explaining the origin of the print from Karl’s first collection. “Thank God for Bill!”

But with success came the pitfalls. “Suddenly I had marketing people. PR people who tried to commercialise the brand. People in my ear about expanding. I realise now that it was okay for us to be small and beautiful. The designs were always original and stood out – trying to commercialise the label did not suit me. I’m only good when I can do exactly what I want to do. If it sells great, if it doesn’t, that’s equally fine too. You move on and create something else.”

Eventually in the early ‘90’s, the fashion shifted into a different direction. With the rise of designers like Collette Dinnigan and Akira, Jenny watched the popularity of the label fade away. “We were open for 22 years and for 16 of those we reigned. Financially 1988 and 1989 were huge, but by 1995 I had closed the shop and was happily living in the bush again.” Jenny was in a new phase of her life with a new partner, and was happy to have left fashion behind. By this stage she had parted ways with Michael Ramsden and found new love with sculptor Danton Hughes. “There is a time in your life where you have an explosion of popularity, but then it ends. That is the nature of all endeavors. I lived an amazing idyllic, passionate romantic life. I was very happy.”

In 2001, Jenny’s partner Danton took his own life which drastically changed hers forever. “His death made me retreat deeply into my spiritual life. Through his death I was able to experience the most shocking suffering, which has lead me to a path that is so meaningful now.” After years of a quiet existence in the mountains, the popularity of labels like Romance Was Born meant that Jenny’s work eventually emerged back into the public eye and she soon began collaborating again with this next wave of artists. “These young designers discover your brand. Then through their amazing following your work is dragged back into the lime light. It was so much fun to come back in trend again when you’re older and wiser. I see it as fun. I don’t have to make money. It’s a beautiful way to live at this age.”

When musing on her own ideas of beauty, Jenny shares some words of wisdom. “As much as I love to be beautiful on the outside, real beauty is within. The well that comes from inside of you. One of my favourite sayings is, ‘How well did you live? How well did you love? And how well did you learn to let go? I am just a tiny pin prick of a dot in the vast universe and I know my place. Coming back into the fashion world is a bonus, but I’m completely at peace with whatever life has to give me. And that is true freedom.”