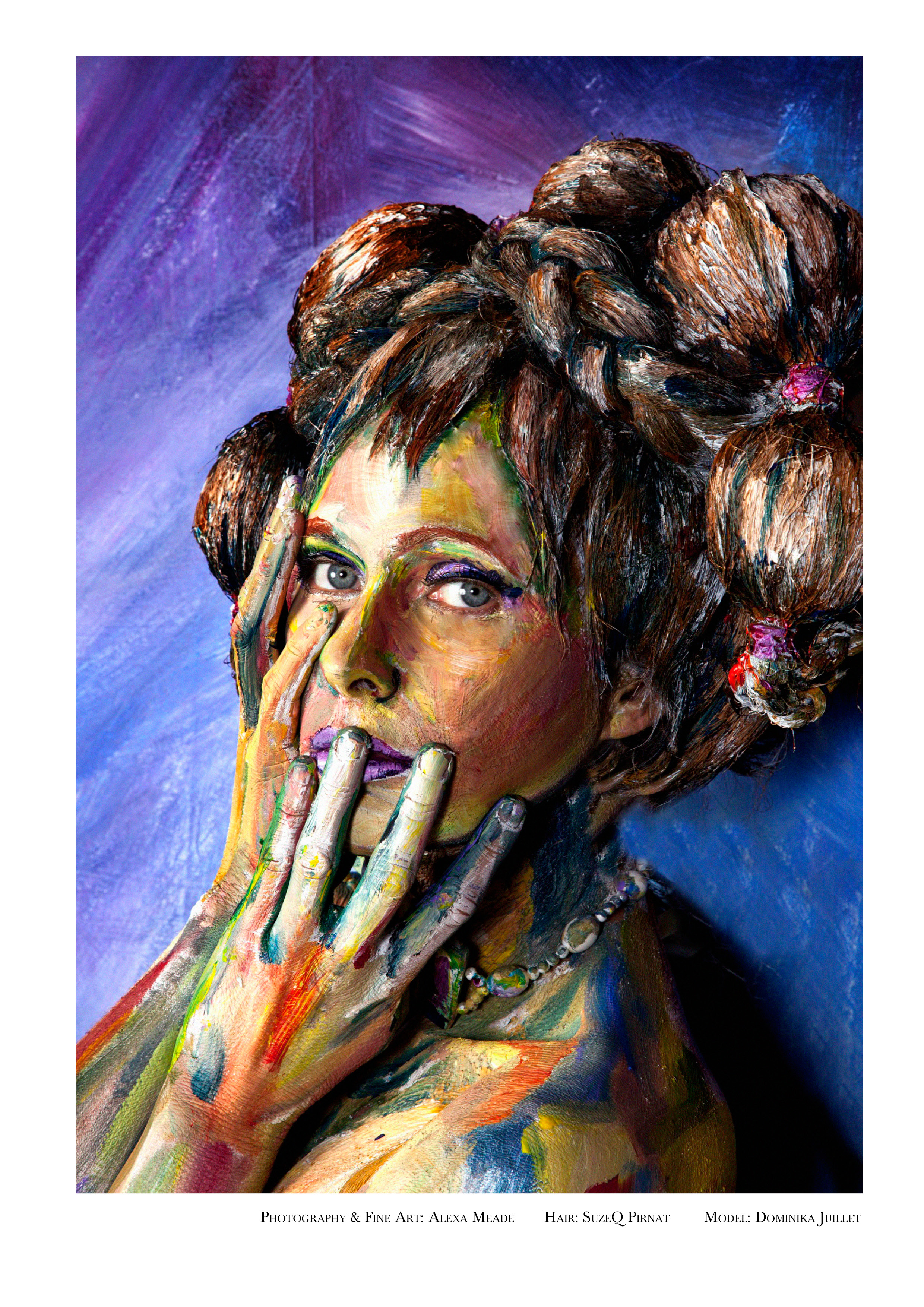 Whilst makeup artists spend years perfecting their skills in contouring and highlighting to enhance a person’s features, Artist Alexa Meade deliberately works to do the opposite. Alexa’s artform is to place paint onto a human to create the illusion that the subject and their surroundings are a flat two dimensional image, then she takes her photograph. Describing her art, “like a reverse Trompe-l’œil . Unlike a traditional Trompe-l’œil painting which tricks the eye into thinking a 2D canvas might be a real 3D space, I do the opposite.” Her artworks have been capturing global attention since 2010 and whilst she may be considered a body artist to some, in fact, she is a brilliant portrait artist who uses the three dimensional body as a canvas, creating the world, the art and the imagery herself.

Alexa met me in Sydney on a recent working trip to Australia. Over coffee we spoke about what it was like for her to transition from studying political science, to pursuing an artistic career following her fascination with the manipulation of dimension. I couldn’t help but feel envious over the short span of time it took for her work to go global. Drawing a parallel between her younger political career aspirations and her art, Alexa is clear that, “working on the side of the politics that dealt with spin and PR, I became really fascinated by how we interpret information and the mismatch between what is said and what is heard. I carried over my interest in spin into my art, prompting me to explore the different ways that visual perception can be manipulated.”

I knew Alexa was an artist and intellectual from watching her TED Talks and as my time with her drew to a close, I found myself wishing we could talk for hours. Whilst flipping through the pages of Laud’s first issue, Alexa studied the magazine’s imagery like you would a precious stone. Even becoming fascinated with the shapes different lights create in the pupils of models. Returning to her studio in Los Angeles, Alexa was inspired to create for LAUD Magazine, her own 2D/3D version of a fashion portrait.
Teaming up with friend and hairstylist, Suzie Q, they tipped their hat to past fashion imagery with Alexa’s inspiration being, “to take a different spin on beauty”. “Some of the ways I work with the face are somewhat different to the way most makeup artists work. For example I like to actually exaggerate the circles under the eyes. I have to take all the contours of the face, even the unflattering ones, and really capture them as they exist because if I don’t do that, there’s something about the final image that won’t feel real. It won’t feel true. So rather than using my brush to hide things, it’s really to bring things out that are really there, and ALL of the details, the beautiful and maybe the not so beautiful.” Bringing out the imperfections of a person in their portrait is where Alexa believes most beauty lies and this certainly translates in her art.

In 2016, Alexa’s work is being exhibited in Paris, Luxembourg, Canada, Munich, Baltimore and San Francisco. With exhibitions happening around the world since 2010, Alexa has fast become an inspiration for makeup artists and art lovers alike. Rebelling against the idea that an image tells a dimensional truth, she invites us to notice the intricate light and shade that makes up our dimensional world and possibly encourages the return of keen observation.

Exploring the idea of the future for her art, Alexa explains, “I really want to explore bringing my art to life and so far I have been primarily focusing on painting people and photographing them, but I want to see what happens when I put them in front of a video camera and allow the movement to really bring the artwork to life; to show the form of the model and have it appear to be flickering back and forth between 2D and 3D”.