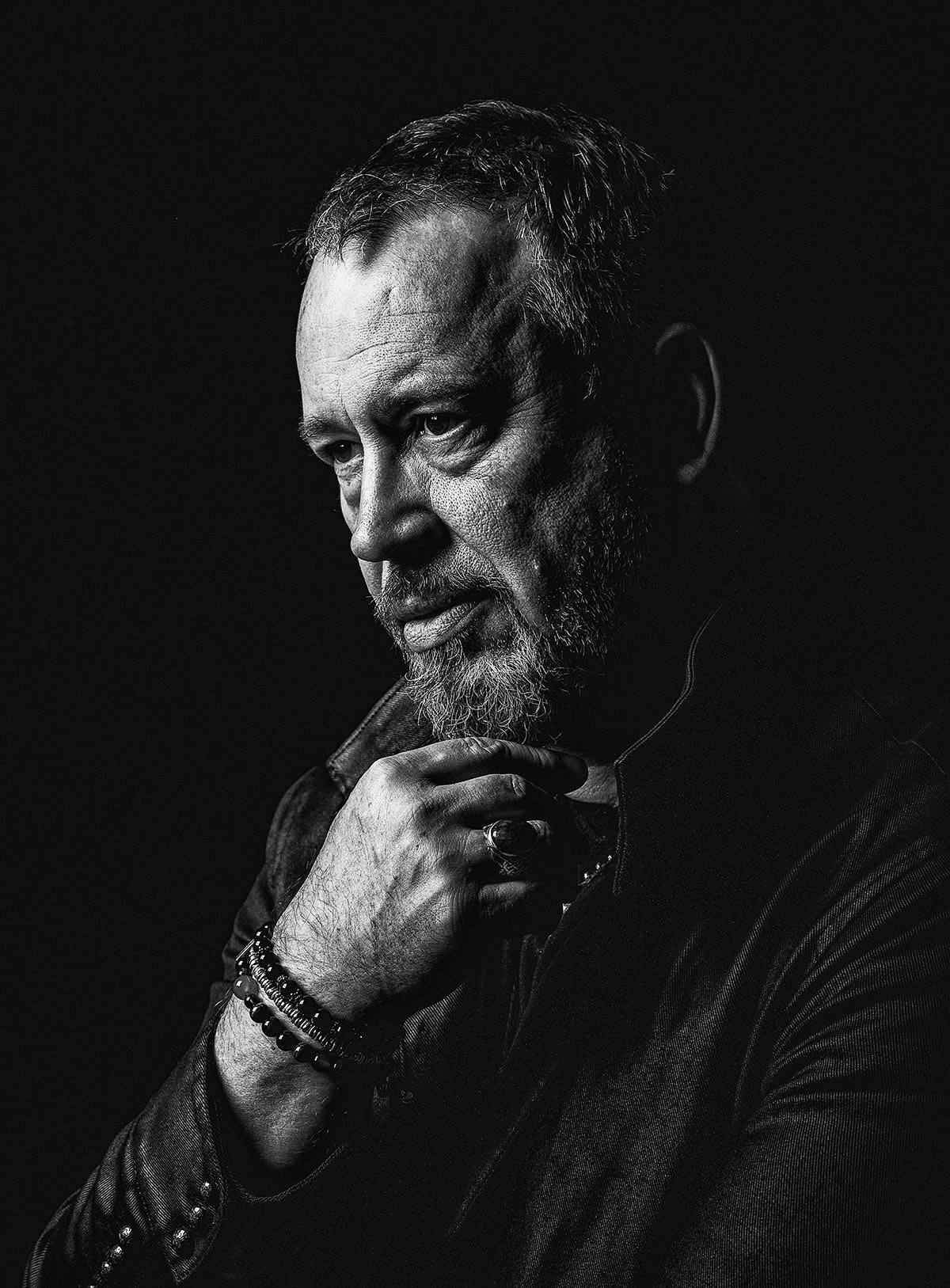 Over three decades, Michael Key has positively affected the careers of every aspiring and working Makeup Artist in the industry. I don’t have any official stats to back up that statement, but I ‘d put money on the truth of it. It may have happened through seeing Michael’s work on memorable productions like How the Grinch Stole Christmas, Planet of the Apes, Star Trek: Generations and Star Trek VI, Coneheads, Patriot Games and Alien Nation. Or it might have been during his time working on the iconic Star Trek TV series in which he gained five Emmy Award nominations, taking home two. New makeup artists may know Michael best for the magazine he created – Makeup Artist Magazine (this year celebrating 20 years) and the world renowned International Makeup Artist Tradeshow (IMATS). I don’t know of any other makeup artist that hasn’t been inspired by attending, reading or watching any of Michael’s projects. Michael serves on the Academy of Television Arts and Sciences awards committee. He is also an Emmy Awards judge and a regular guest lecturer at international conferences, schools and trade show 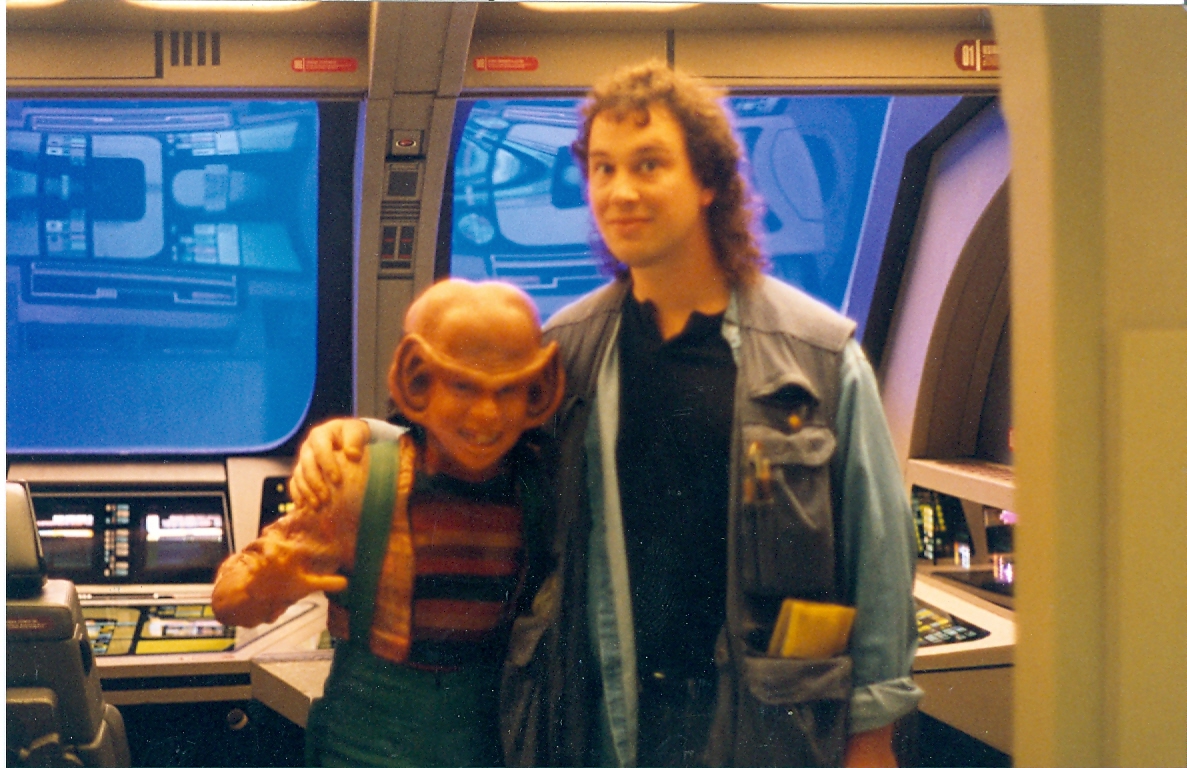 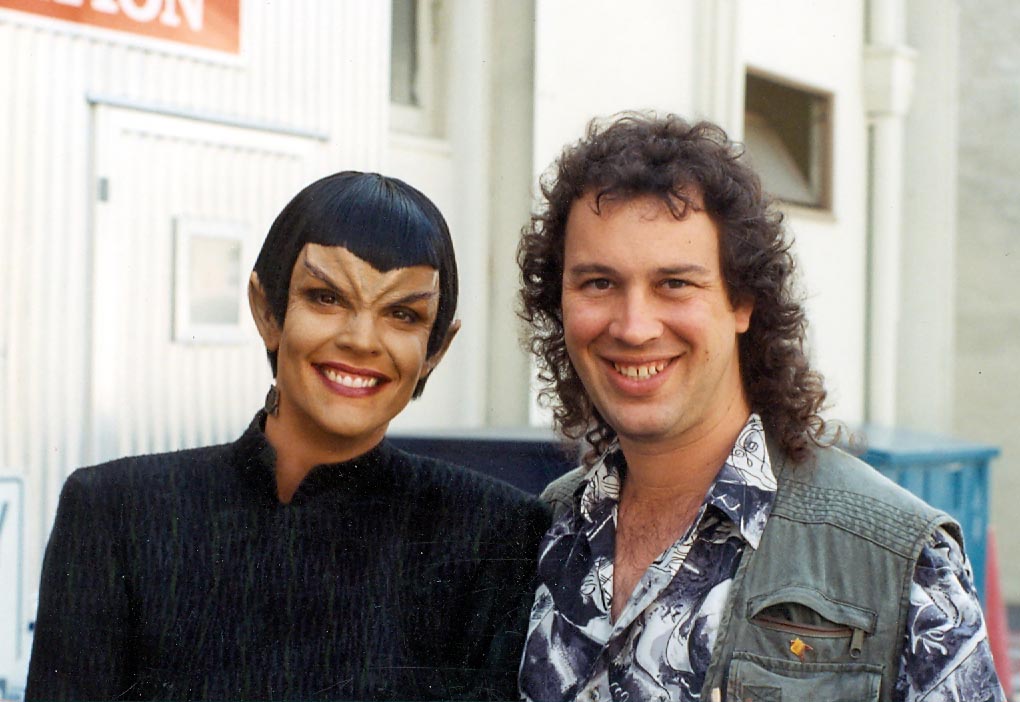 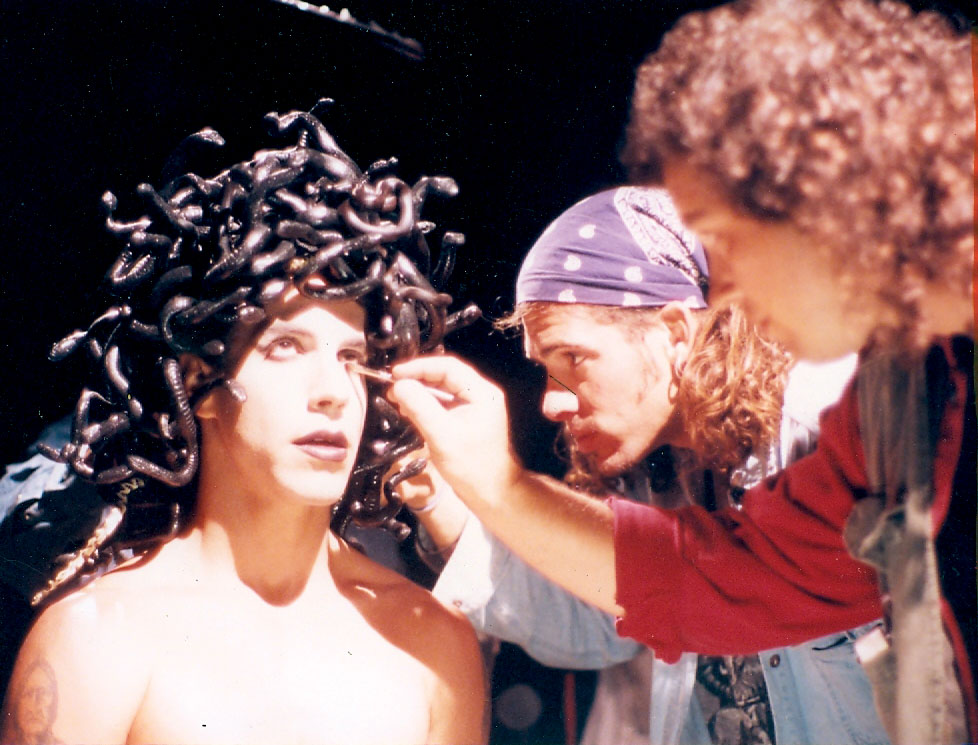 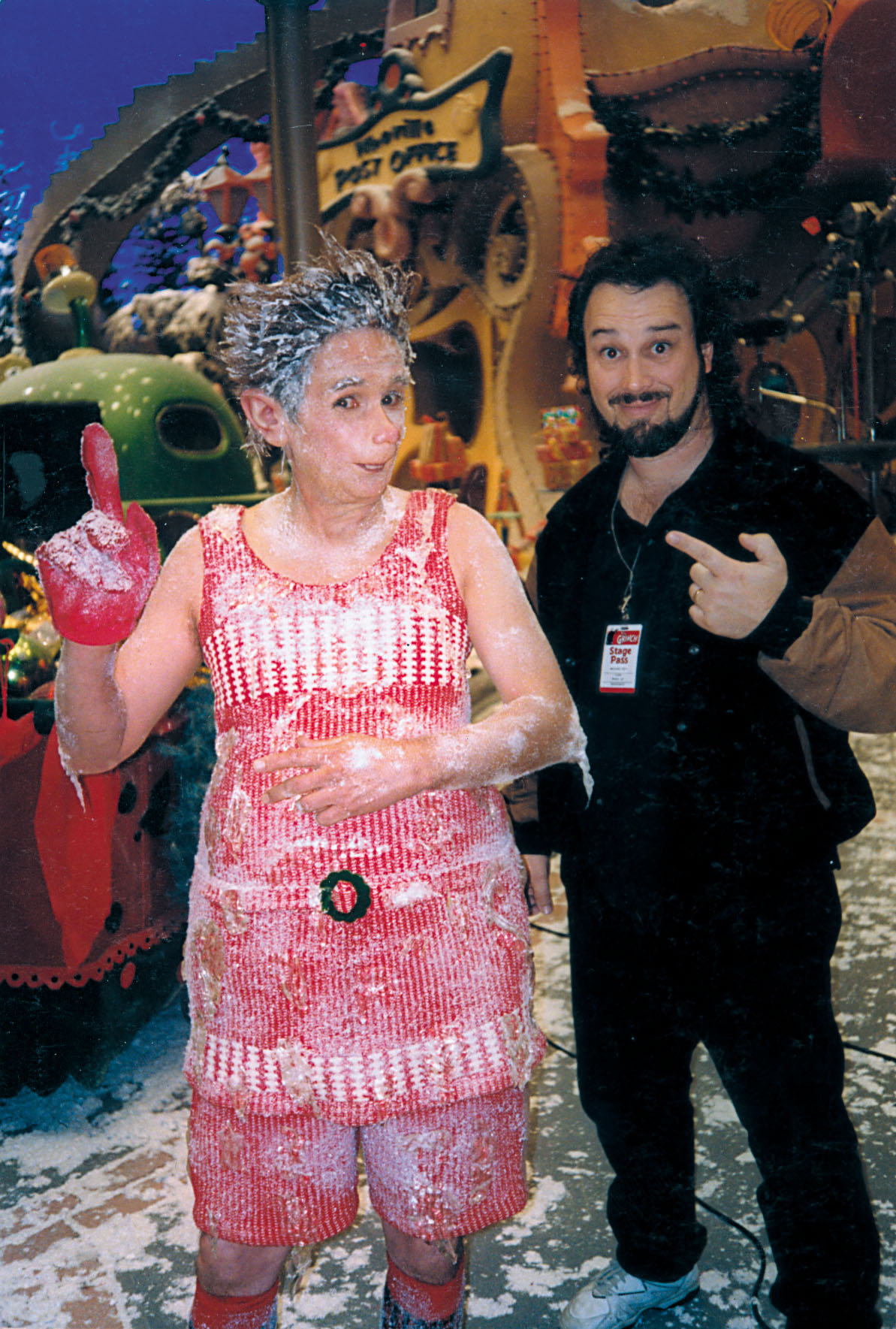 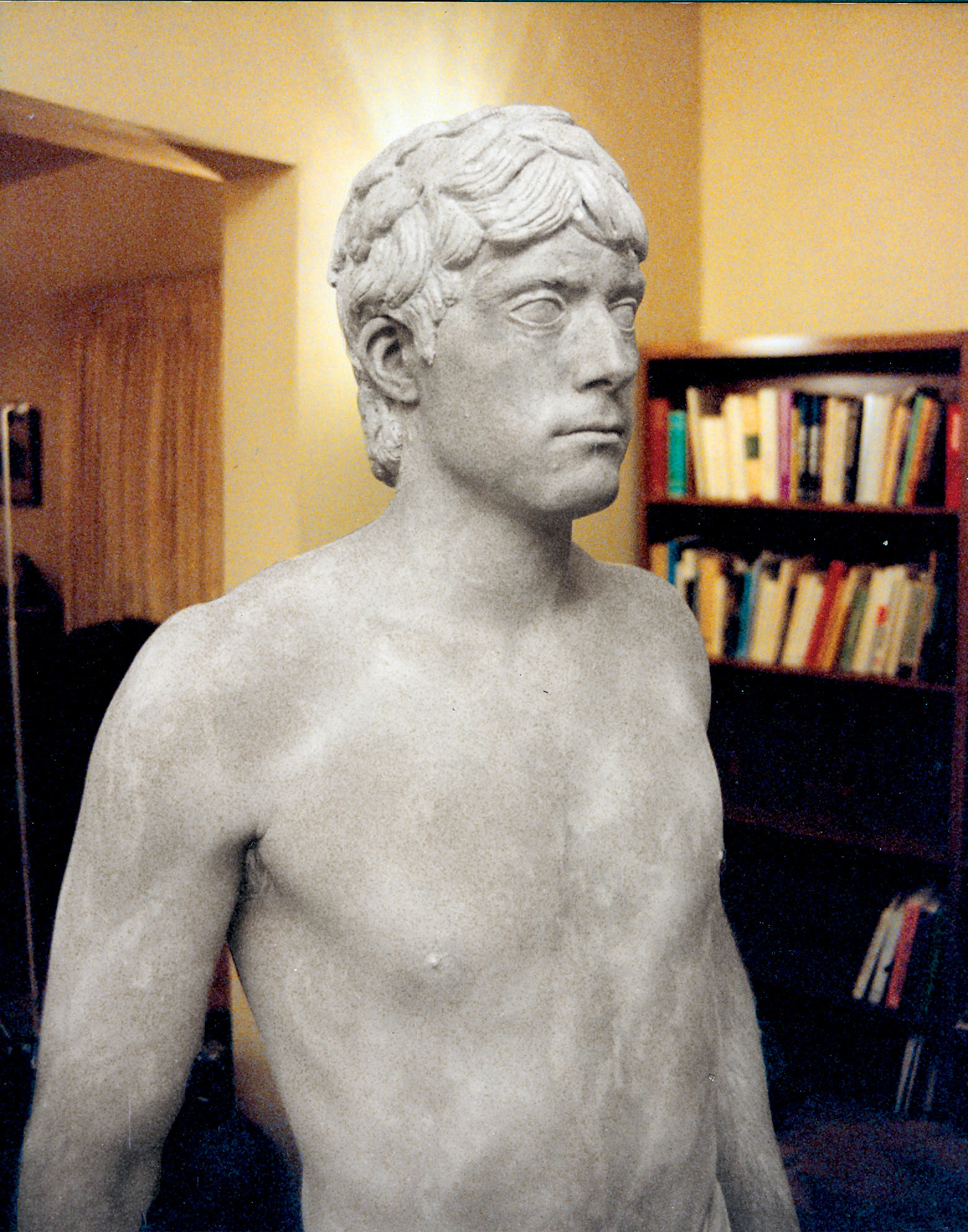 For LAUD Magazine issue #4, I couldn’t think of anyone else more appropriate to chat with. You have become the Godfather for a positive and inspirational makeup artist community globally. What originally attracted you to becoming a Makeup Artist?
I grew up watching a lot of Universal monster movies and science fiction television shows. At a young age I was aware of very obvious makeup but it wasn’t until the age of 24 that I came across a behind-the-scenes magazine on the movie Alien. Inside were brief descriptions on how certain things in the movie were created so for fun I decided to make one. I fumbled along with my creation until I had a crude version. When Halloween came along I wanted to take my new skills in sculpting, molds, and painting to create a fantastic Halloween makeup. Foam latex and other products were expensive and made in bulk so I began recruiting my friends to invest in my materials and in turn I would create them a Halloween makeup as well.
After Halloween it occurred to me that people did this work as a career and made a living doing it.
Make-up was far more fulfilling than my day job, so I took my feeble photos and networked around town until someone gave me a job with MEL (Makeup Effects Lab). A couple years into my career I had the opportunity to be over NBC’s prosthetic lab in Burbank, where they taught me beauty and television makeup. This was a pivotal moment allowing me to become a full service makeup artist.

Who have been your greatest mentors in the makeup industry?
There are many makeup artists that have inspired me. My greatest mentors are Michael Westmore, Dick Smith, Jeff Dawn, and Leonard Engelman.

You have been nominated five times and won two Emmy’s which is an amazing achievement! They say winning isn’t everything, however did winning change anything for you professionally or personally?
As an artist, you can be insecure about your work. Winning an award does validate something in you. It seems to speak that maybe you are doing something right. My parents did not have very much vision for me as a professional makeupartist. I think winning my first Emmy was a landmark.

What motivated you to start the original idea of ‘Craft News’ and then breathe life into it until it evolved into Makeup Artist Magazine? Was your vision for the magazine there for you from the start or did it grow as you went along?
Craft News was created when I was elected Craft President of the 706 Make-up and Hairstylists Guild. I didn’t want to simply replicate the position, I wanted to raise the bar. The announcements that had been mailed previously were primitive – much like a lost dog poster on a telephone pole. I had learned to use Photoshop doing computer makeup designs. I had intended to make a full color 1 – page announcement for meetings but learned that for the same price I could make a 4 – page newsletter and Craft News was born. There were only 3 issues in total but each issue doubled in size. I could see the growth and knew it wouldn’t be sustainable as a charity. I also wanted it to be available for all makeup artists so Craft News transformed into Makeup Artist magazine. I was very naive in the beginning. I didn’t realise that it was an insane business move and most magazines failed. I didn’t realise the time it would take or how popular it would become. At the time I wasn’t looking for a career change. I thought it was going to be a hobby that my wife and I could do at the coffee table. I had no idea what I was setting into motion.

How far into the Makeup Artist Magazine journey did you create the idea for IMATS? What was your intention in creating IMATS?
It was the mid ’90s. Internet was in it’s infancy, there was no social media, and email was new. I knew artists in Hollywood, those were my people, but I wanted to reach artists in the rest of the world. Now I can see I was trying to pave a road and drive it at the same time.

I had asked my magazine publishers how to build an audience. They had told me to go to trade shows, so I asked which shows? They had told me about hair shows or nails shows but there wasn’t much about makeup. After about 10 calls I realised that there needed to be a show for makeup and makeup artists. I wanted it to be neutral and beneficial to all. The first IMATS took place on January 1, 1997, just a few months after launching Makeup Artist Magazine (launched 8.3.1997). It was in a hotel in LA. I had no idea if anyone would purchase tickets but we ended up breaking the attendance record for that facility as artists came from around the world to celebrate makeup artistry.

No great project is created with complete ease, was there ever a time you thought it might all be too hard? What did it take for you to keep going?
I had no idea if any of this would work but like I said, I wasn’t looking for a career change or a sole source of income. I was an award winning makeup artist and happy doing so.
Any new venture has hardship and growing pains throughout. I was greatly encouraged and affirmed by peers in the industry. They were the wind in our sails.

Have you ever really taken a moment to understand the enormity of value to the Makeup Industry that you have created? Have you imagined a world without your projects? What is your favorite aspect of what you have created for the industry?
I had the privilege of pioneering a magazine and a show for makeup professionals. If I hadn’t, I believe someone else would have. After 20 years, it makes me happy to look back at the people who have grown up on Makeup Artist magazine or at IMATS. Their first inspirations came from us and are now leaders in the industry. I take great satisfaction in being a part of that.

Who would you like to see present at IMATs who hasn’t yet appeared?
Initially I think of great leaders that passed before we started IMATS. Take Kevyn Aucoin for instance, an amazing makeup artist and inspiration to those in the editorial beauty world.
It would give me a great personal pleasure to have Rob Bottin speak at IMATS. We have had him featured several times in Makeup Artist magazine and he has inspired me personally by his work. I would also love to have Pat McGrath keynote at IMATS. She too is a great leader in the industry.
There are so many artists that have influenced entire generations of makeup artists. I would love to see them at IMATS continuing to share the passion of our art.

What has been your favorite evolution in the art of makeup over the past few years and what has been your least favorite?
My favorite evolution are the products we daydreamed about that are now possible. There are so many incredible products out there now.
My least favorite evolution has been the areas of makeup artistry that have been displaced/replaced by digital technology. For example, in the early days, they had true airbrush. This was when an artist would actually airbrush on a photograph. This art took time and was expensive so it wasn’t done throughout. Usually only the cover would be airbrushed. Now there is little truth in beauty. Similar things can be said for artists in motion pictures and television. They don’t have to flex all the muscles needed in the past.

The art of a makeup career isn’t just about makeup skills. What do you think are the most important traits to be a successful makeup artist?
First you need to have stamina and next you need to have enthusiasm. Being a makeup artist can be like joining the Foreign Legion – they own you from beginning to end and your personal life is hard to plan and manage. I think to be a successful makeup artist you have to love what you do. There are better ways to make money, if you want to be happy this career path needs to be part of your DNA.

What are you most looking forward to at Sydney IMATS?
I love Australia and have a great appreciation for the culture. Sydney is not a huge market but I have faith that the community will continue to grow. There is a lot of great work that is produced out of Australia. This year I am very excited to be featuring the team who won an Oscar for their work on Mad Max: Fury Road. Australia should be very proud.
That we are!

A SELECTION OF MAKEUP-ARTIST COVERS 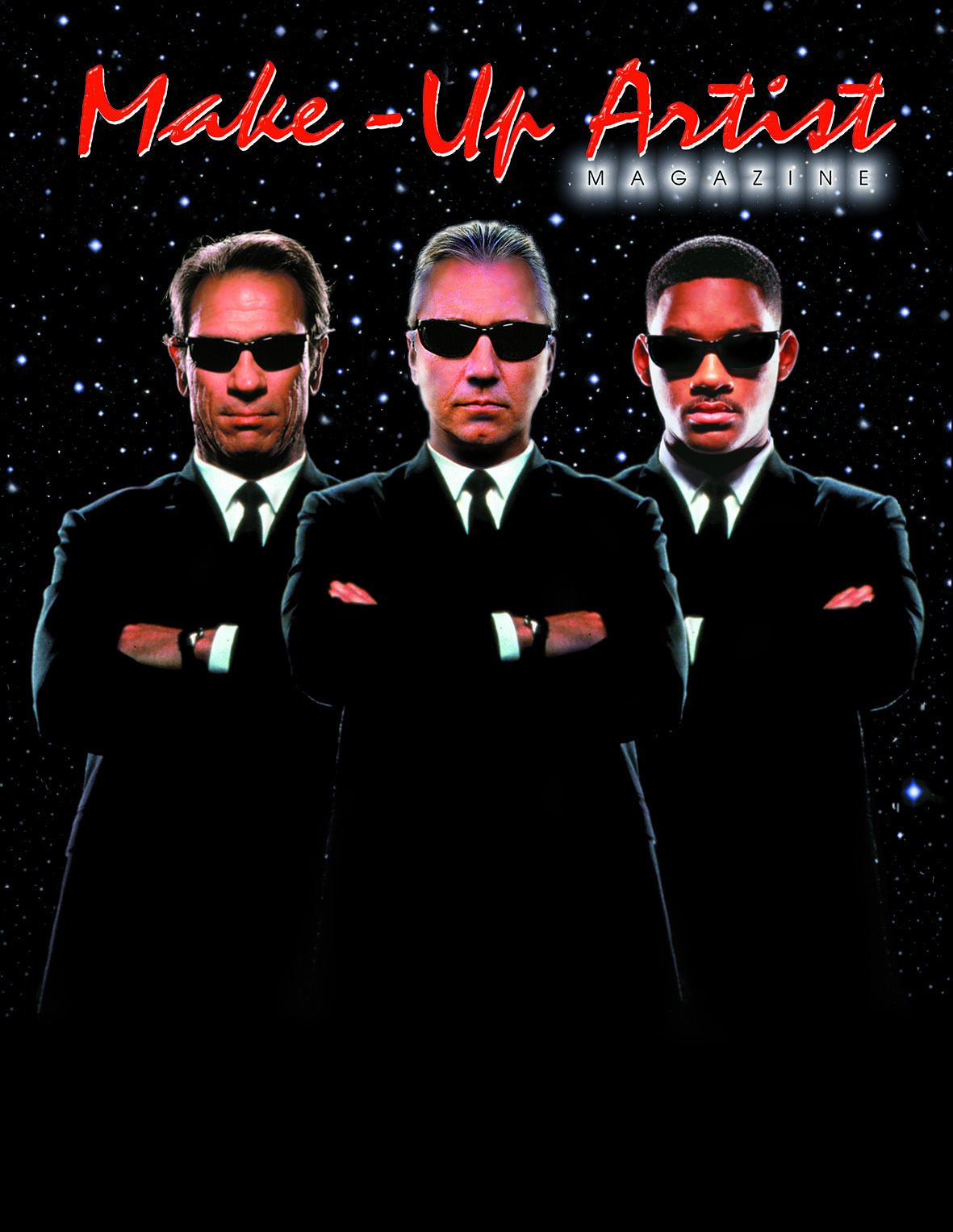 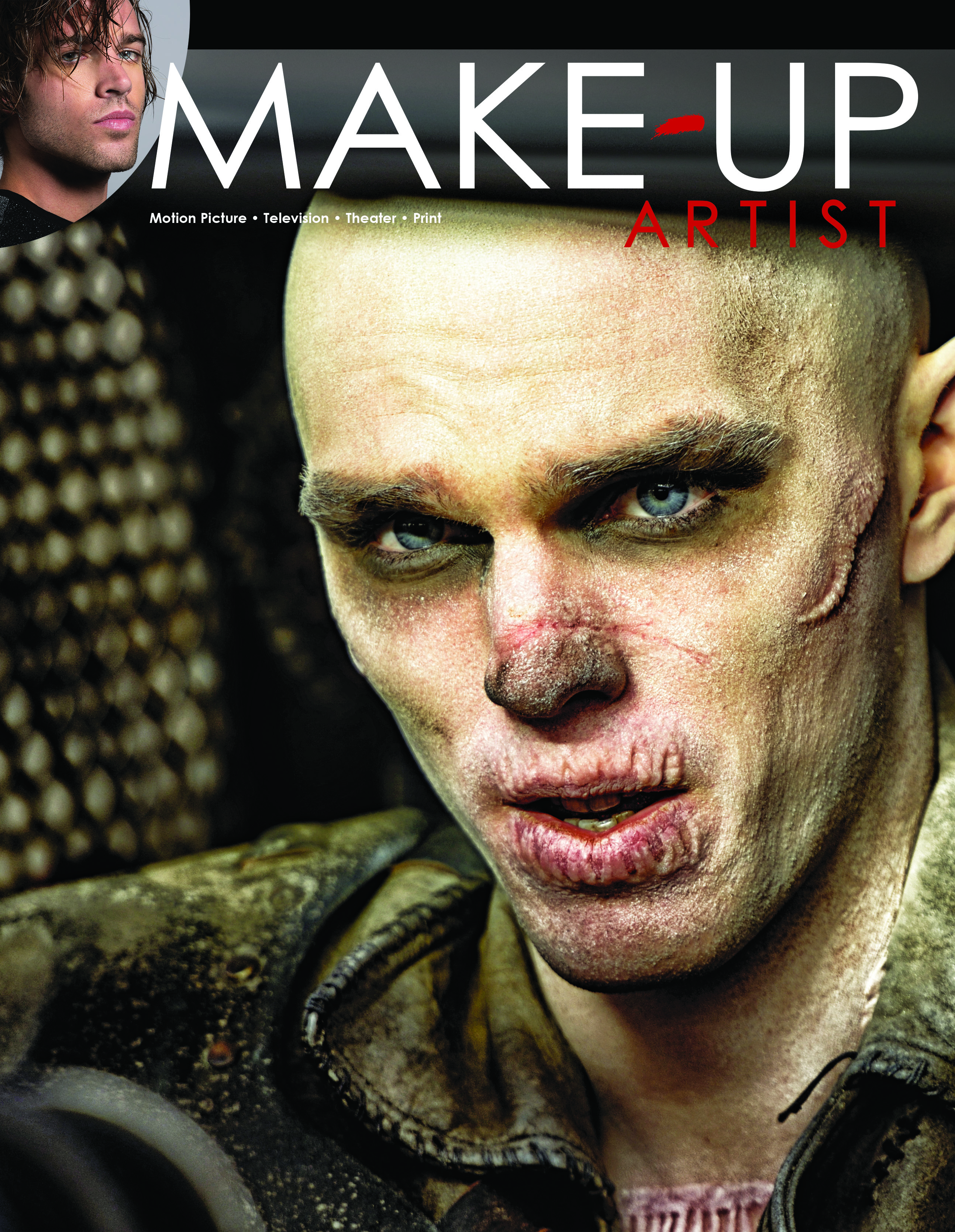 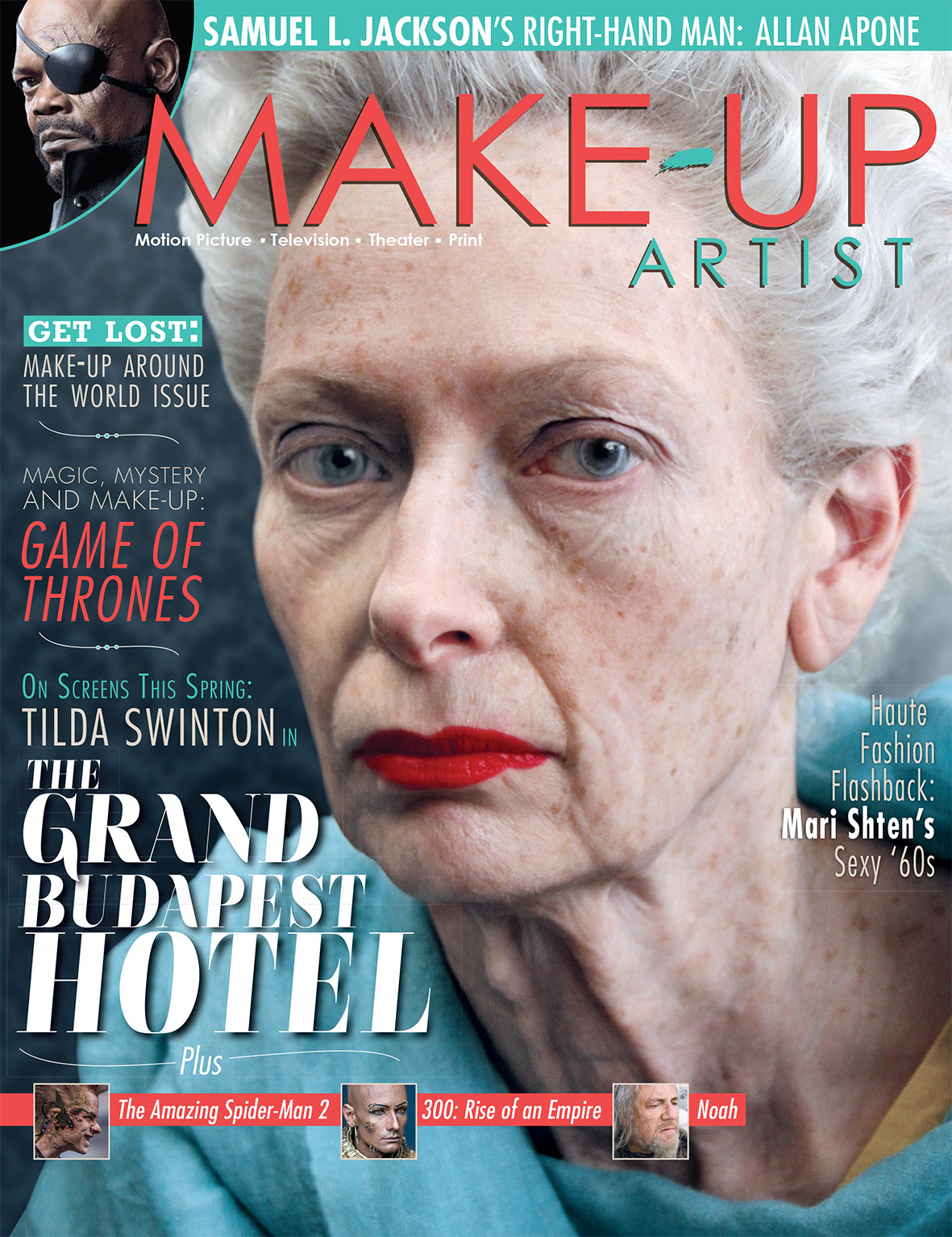 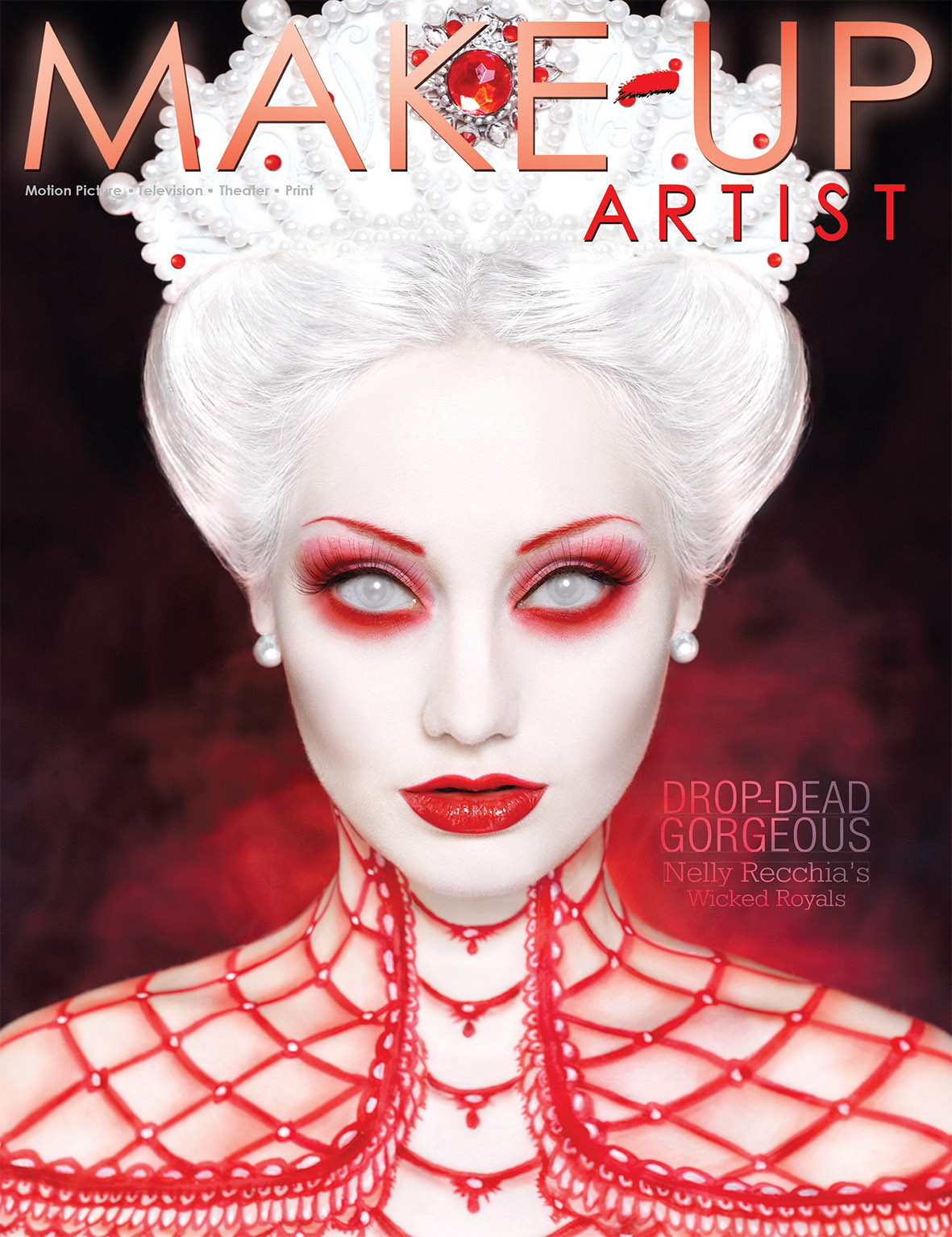